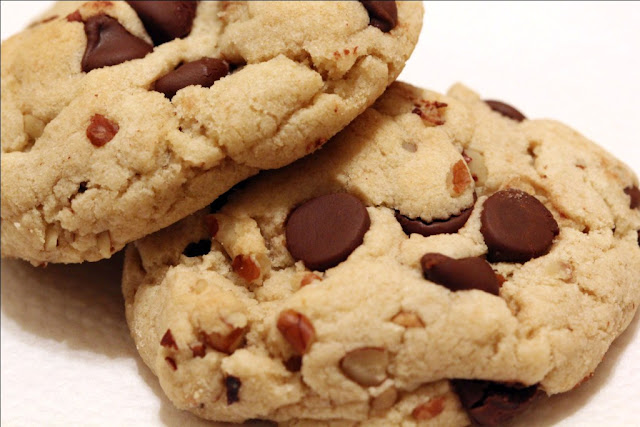 The recipe for this hefty cookie can be found the Complacent Cooking blog written by @Tomboy_Femme (Twitter).  As she states, it's one of the easiest recipes to make (She had me at "easy").

A couple of weeks ago I had a twitter conversation with @Tomboy_Femme that revolved around bacon.  She maintained that the marriage of the chocolate chip cookie and bacon could be blissful.  I was skeptical but at the same time intrigued by the idea. I'm willing to try anything once, so at her suggestion I decided to try the recipe.

Dipping my spatula into foreign territory I cooked up some bacon and cautiously tossed bits of  it into the cookie batter.  As I stirred, I kept thinking, this is a nutty idea (that's when I remembered to add walnuts).  I put a tray of the chocolate chip/bacon dough balls into the oven and waited patiently to pull them from their hot little love nest.  Like newlyweds, my cookies emerged with a special glow.  To my surprise, they were substantially large cookies. They didn't flatten out like other chocolate chip cookies that I've baked.  I can only best describe these yummy beasts as Big Boi's...tall, dark, and definitely handsome.

I'll have to admit that I was a little squeamish before biting into the first one.  It was "okay."  I think I had a chip on my shoulder (pun intended) about the whole idea from the start.  I brought them in to work and my coworkers were split. Some liked them and some where like me...ambivalent and sitting comfortably on the fence.  I just don't think I'm ready for bacon in cookies yet.  I did see a recipe for bacon chocolate cake that looks tasty though. Wonder if I should try it or leave well enough alone?

I will tell you though, that this is one of the BEST tasting recipes I've tried for chocolate chip cookies. They're not too over-the-top sweet and when you bite into them, they're soft on the inside and firm on the outside.

On my second try at baking them, I threw in some mini M&M's. It made for some colorful and crunchy cookies.  As you can see, I'm not so good at making spherical balls of dough but whatever shape you make them in, they're not going to flatten out.  That is what I love about this recipe. I don't care much for flat chocolate chip cookies.  I like 'em like how some of you femmes like your bois...BIG! 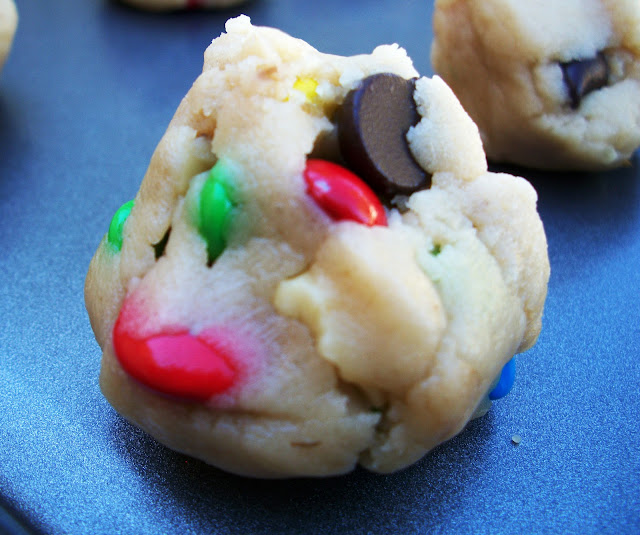 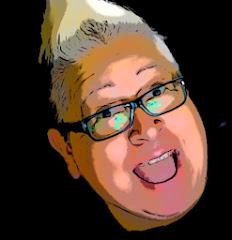